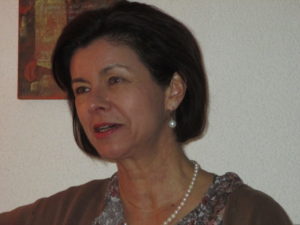 I, Hanna Biedermann have started my business life as a certified movement educator. Since 1999 I worked as a calligrapher.

The first time I was introduced to calligraphy was in 1986 while living in England. At the time I couldn’t have imagined it was the beginning of a new passion, which has continued until today. My calligraphy journey began with formal education and training. After my return to Switzerland I continued with regular courses for several years, first in traditional calligraphy with various fonts, writing tools and techniques, followed by experimental calligraphy. In the beginning it was fascinating to learn how to properly handle a pen with a pointed nib. To slowly apply the understanding how to perfectly guide the nib on paper and observe how delicate strokes and fine lines are waiting to be captured on paper. I’ve learned to write with various writing instruments, each of which creates its’ own unique results and unleashes the desire for more experimentation. The transition to move in to experimental calligraphy was done fluidly, while opening up new realms of diversity with no limits. On several occasions I have taken part to the annual one-week calligraphy workshop housed in a monastery in southern Switzerland. Since 1995, I am a member of the Swiss Calligraphy Society.

During the ‘90s I lived in the USA for a few years and became a member of the Calligraphy Guild of Delaware and Philadelphia. The activities and exchange with American calligraphers imparted tremendous benefit such as joint exhibitions in Wilmington and Philadelphia and workshops at the Art College in Philadelphia under the leadership of well-known American calligraphers like Sheryl Hirsch, Carl Rohrs, Nick D’Aquanno. This was a very rewarding and important period in my calligraphy training.

My art pieces have been exhibited at solo exhibitions and at group shows in the United States and Switzerland.

Since 1999 I have been offering private calligraphy courses.

On ProntoPro there is an interview with me.